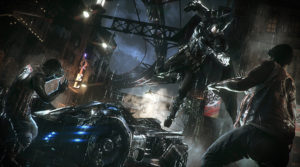 As the saying goes, you “save the best for last”, and with Batman Arkham Knight the team at Rocksteady Studios did just that, as they put a bow on their work on the Arkham series. The final chapter of the Arkham series builds on the open world gameplay and the multiple play modes that have made this series not only popular, but arguably the best superhero gaming franchise ever. The final chapter of the series includes a multitude of ways to play and adds, for the first time, a drivable Batmobile that can alternate between going fast in pursuit and becoming a tank for battle. Though the Joker is dead, he still makes several appearances and that does not prevent Harley Quinn from picking up the mantle. You can even play as Harley Quinn via a DLC in her own storyline or you can play as Batgirl with Nightwing assisting in another storyline. You can also play as the Red Hood in the GameStop exclusive DLC that will become available to all Premium Edition and Season-Pass DLC owners in the future. In the main storyline you have over 50 costumes and can enlist the help for the Red Robin. You can play as Azrael, which is a nice touch in bringing back the team in various forms for this grand finale. A cool mode also exists that allows you to play as Alfred, which is awesome. Scarecrow is the ultimate villain and plays the primary antagonist in this game; however, you still have Penguin, Two-Face, Harley Quinn and others to contend with. Made strictly for next gen and PC platforms, Batman Arkham Knight combines the best of the series and adds the mobility of the Batmobile to make for the best experience yet in a superhero game. The series has been the standard for years and one can only imagine what Rocksteady will do with their rumored involvement in a new Superman series of games. One trusts Warner Brothers Studios will enlist the right partner to reimagine the future of Batman in gaming and with next year’s Batman vs Superman movie, one can imagine a Batman game in a Superman game in the future. Bar none, Batman Arkham Knight has been one of, if not the best game of the year and is worthy of the Premium Edition purchase for just under $100 which includes 6 months of DLC’s. For more information, visit www.batmanarkhamknight.com.