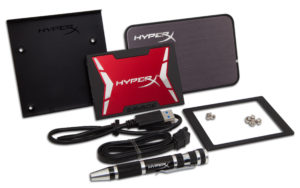 Many moons ago I was known as the galactical atom-spitting hero, Da Great Deity Dah, and I released 4 records to some acclaim in the 90s. 2016 marks the 20th anniversary of the Life or Death EP and as such, fans have reached out to me about finding old vinyl and unreleased music. This brings me to the HyperX Savage solid-state drive from Kingston. I needed to digitize old ADAT tapes to be able to mix and master songs digitally and get some material to my fans who have been actively posting old material on YouTube. Using the Toyz Tower multimedia gaming rig we built, I used the HyperX Savage SSD with Adobe Audition software and a Behringer FCA1616 audio interface to digitize hours of tapes, eight tracks at a time. The HyperX performance was impeccable with an ability to export tracks to Wave files in a matter of seconds, literally. The 480GB capacity was more than adequate to store over 50 songs, each featuring 16 tracks of music. Read and write speeds are up to 560MB/s and 530MB/s respectively with a SATA 3.0 capability of 6GB/s. I love the accompanying installation kit which includes an enclosure along with screwdrivers and a bracket for 3.5” bays. You also get complimentary Acronis True Image HD software to clone drives if necessary. The HyperX Savage 480GB SSD is available at www.kingston.com and retailers like www.amazon.com.