The past generation of vehicles by BMW were designed under the stewardship of the legendary Chris Bangle. His signature rear-end treatment received both praise and scorn, yet sales triumphed. Chris is no longer with BMW and the Chief of Design duties have been assumed by Karim Habib who is bringing an inspiring language to the vast BMW portfolio that includes Mini and Rolls-Royce. We had a chance to speak to him earlier in his career before he took leadership of the design team. He had been working on the gorgeous CS concept which now is interpreted in the new 7 Series and other cars in the portfolio. I include our dialogue below and also an excerpt of some thoughts he shared with BMW internal media about the new 7 Series.

Damola Idowu: So talk to us a little bit about the CS.
Karim Habib: …Is there anything you want to know more about the design?
Damola Idowu: Inspiration. Let’s start off with the inspiration.
Karim Habib: You know, this car is meant to be above the 7 Series. That’s the real flagship for BMW and for me, the inspiration is like real luxury and elegance, like a lot of it coming from…this pretty sensual culture from Italian cars and sculpture. If I have one key word, it’s sculpture; it’s movement in surfaces; it’s light and shade; and that would be pretty much what inspired me…
Damola Idowu: …I mean, that is one of the most breathtaking concepts. In fact, that’s why we say, ‘concepts we love’ – one of the most breathtaking concepts from the design language to the flowing lines – from the interior. What inspired the interior?
Karim Habib: The interior was inspired by layers. The interior was done by a designer called Nadya…and it’s inspired by layers. Like if you look at it, you can see…there’s like a layer on top and even like on the console and the dash, the way the things are sort of one over the other…you can see these layers that are floating one above the other.
Damola Idowu: Now this is being confirmed to be built now, right?
Karim Habib: What we confirmed is that something based on that…
Damola Idowu: Well, exactly.
Karim Habib: …is going to be built…
Damola Idowu: So talk about that then, because as you’re saying, this is going to be a flagship above, but it will be under the Rolls-Royce but above the 7 series and there’s a gap where other manufacturers are taking advantage of. So talk about that and now moving forward what are some of the things that you try to carry on?
Karim Habib: Well, I mean, it’s very much that spirit that we have in the show car that we’re going to carry across into production. It is really like the ultimate embodiment of BMW luxury and it’s done in elegance and super sportiness. Like Rolls Royce is real elegance, presence and status and this thing goes – it’s lower; it’s fast; it’s nimble, although it’s big. It’s a real driver’s car but in true BMW essence, you know, a driver’s car but extremely luxurious and that’s what we have here and that’s where we’re going to go for in production.
Damola Idowu: Thanks so much

The new BMW 7 Series is very important to us, of course, because it is the flagship. This car is particularly important to us because we feel we’ve really taken the definition of what a 7 Series is, actually quite a bit further than we have in the past. It’s really the first time that we addressed the 7 Series as a symbol of modern luxury so it really is what you’ve known always – the 7 series: dynamic, athletic, sporty. It looks muscular, but at the same time we talk about luxury, level of finesse and quality, and attention to detail that we’ve never seen before on a 7 Series. And some of the examples you can see of this obsession with detail, if you look at the front, first the kidneys, they are not only very big, very present, very proud, but it’s the first time that we actually do kidneys that open and close and kidneys are really the heart of any BMW in terms of design, so we’ve made a very important innovation really visible and something you can experience right away when you look at it.
Another thing I’m particularly proud of is that we manage to do the Hofmeister kink in one piece for the first time on a four-door car at BMW so we’ve eliminated a very small shot line, but a nonetheless, very important shot line and it’s really one piece from the B-pillar to the C-pillar and coming back and that was something we invested quite a lot of energy and money in but exactly what is necessary for an iconic feature like the Hofmeister kink. One of the important aspects from the design point of view [of] the 7 Series is that this car is much lighter than the previous generation. This car is partly in carbon. It actually has a carbon core in it so we wanted to show that so we have a small badge in the B-pillar. When you open the car, you see a real carbon badge. But also, in terms of design, we made sure that the car illustrates that likeness. That’s why that even the body size [has] got a lot of big, generous surfaces, but it looks pretty lean and elegant and also, that’s a very important characteristic for the 7 Series. Every time we create a car, for me personally, it’s very emotional, but when it comes to the 7 Series, the flagship, I can say that today as we arrived, I saw two white 7 Series’ with the M Sport Pack from a distance and it felt really, very good. So it is, it’s something really unique and something that makes my job maybe the best job I could ever have. 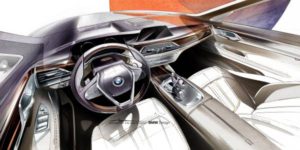