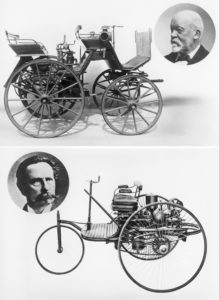 “I always felt Jaguar really needed to be a modern car company….We have [had] a lot of retro stuff in the past, a lot of heritage and now it’s time to move on…I want young people to like this car…because that’s the future customer…It really feels like a theatrical event when [you] get into the car….Is it necessary? No. Is it fun? (Yes.) And that is what it’s all about…” – Ian Callum, Design Director, Jaguar

Since Karl Benz invented the three-wheeled vehicle that became the birth of the automobile, (I had a chance to drive a replica at the museum of German American History in Washington, D.C.) the automotive industry has had a transformative impact on the evolution of humanity. From the means to power these vehicles, whether through electricity, gasoline, or water, the battle has been waged for over 125 years between internal combustion and renewables, even over the form of renewables, be it electricity, fuel cell, hybrids, or extended range electrics with fuel-powered alternatives. Since the inception of the automobile, all of these choices have been available. Gustave Trouvé invented what became known as the first electric car and Amédée Bollée invented what became known as the steam-powered automobile. In the end, Karl Benz won the battle with the aid of his wife, Bertha, who made a famous voyage of 106 kilometers in one of their vehicles, fueling along the way, inventing the brake line in the process, and placing an indelible stamp on human travel. From assembly to fueling, distribution, performance, design, styling, and safety the internal combustion engine has beat out the renewables over the past 125 years.
The impact of the automobile industry on humanity expands beyond mere transportation. For example, Oldsmobile began using the assembly line process for automobile manufacturing and mass production. Henry Ford then revolutionized the efficiency of the assembly line and the affordability of the automobile. He set wage standards and promoted the concept of making automobile technology affordable to the working class which revolutionized everything from manufacturing to financing to distribution. This allowed people from different points on the income spectrum to meet with family and friends or to voyage and explore which expanded commerce opportunities and spurred infrastructure development and the creation of new cities and fostered the evolution of the backbone of manufacturing and laid the foundation for prosperity. Automobile manufacturing laid the foundation for prosperity and supported the expansion of human transport and the movement of goods and commerce intimately into the crevices of land where rail wasn’t able to go.

“We do believe that America is ready for the diesel…BlueTEC is the keyword. We have developed a totally new diesel technology which allows us to meet the most stringent, legal requirements for emissions in California, for instance and with those we’ll be able to offer 20 to 30% fuel consumption reduction and at the same time various strong torque, very powerful engines, smooth-running. It’s a whole new world…Ultimately our objective was to make the diesel as clean as the gasoline engine and the gasoline engine as fuel efficient as the diesel…” -Dr. Dieter Zetsche, Chairman of the Board of Management of Daimler AG, Head of Mercedes-Benz Cars

The acquisition of an automobile is a momentous occasion in family life second to one’s home. The automobile represents the second largest expenditure a family makes. Several evolutions have occurred with the automobile over the past 125 years from the advent of the automatic transmission to the efficiencies in the amount of cylinders necessary to derive comparative horsepower to the current synergies between mobile technologies and car electronics. Several fascinating advancements have occurred, for example, the Mercedes 2006 S500 has the same 303 hp as the 2012 C350, but the C350 uses less fuel with a 3.5L V6 engine through direct injection and operates as powerfully as a V8 and even takes biofuels like E85. Having engines function by deactivating cylinders not needed for power are now commonplace in vehicles. To gain even further energy efficiencies eight-speed automatics are available in cars in the sub-$30,000 price space.
Let me bring this in from another point. Chrysler who was bankrupt in 2009, now has a rear wheel drive sedan with an all-wheel-drive system and an eight-speed automatic, the Dodge Charger, that starts at a sub-$30,000 price point. Typically you find that kind of technology in offerings from Audi like the A7 which costs twice as much. When one factors in the Uconnect entertainment system with in-car Wi-Fi capability, the 8.4-inch monitor, and premium Nappa leather you still get a price point of roughly $35,000. Technology, energy efficiency, luxury, and premium options are now becoming available to a whole new demographic of customers, which in itself will radically change what future generations will expect from their automobiles. To that point the same Chrysler is introducing a new compact model, the Dodge Dart, with a sub -$16,000 price point and future options are proposed to include a 8.4-inch multi-media center found in the larger-size models like the Charger and the 300 and there has been a confirmed ZF-derived nine-speed automatic offering in addition to the available six-speed.
All of these technologies offer more efficiency from lower displacements via direct injections, turbos, and modification to air compression, even entire component efficiencies like Mazda SKYACTIV system are making 40MPG in the highway the norm now. President Barack Obama raised the 2025 target for Corporate Average Fuel Economy (CAFE) to 54.5 MPG and while the initial response was a collective groan that the fun is leaving the auto world like the sad days of the late 70’s, the opposite is true,
more technology is now available at an affordable price and the competition is fierce.

“…Green cars can be good looking, sexy, fast, and big…it’s important to make a statement about getting a green car that’s exciting enough that you want to own this car, that you want to buy it.” – Henrik Fisker
Pair the power and efficiency of the compact car with luxury options like the heated rear seats in the Hyundai Elantra, the 8.4 multi-media technology center in the Dodge Dart, and voice command in the Chevy Cruze and this appears to be just the tip of the iceberg. The evolution did not come gratis, though, the consumer culture dictated that car companies provide these options as burgeoning car customizers were achieving success through conceiving assorted options to add to entry-level vehicles and the Specialty Equipment Market Association better know as SEMA became a mainstay among the new generations of drivers. According to the Automotive Aftermarket Industry Association, overall aftermarket sales totaled $285 billion in 2010 with a growth of 4.3% from the previous year.
This massive industry exists for a reason. Many people spend more time in their cars than they do in their homes. When one factors in time spent commuting back and forth to lunch, travel on the weekend versus time spent preparing for work or worship and performance of tasks in their home, more time is spent in one’s automobile than in one’s home. On a typical day, commuting to and from work can consume four to eight hours, all things considered. So the question becomes what do people do and what do they want during this idle time.
The structural shift in transportation and the need to be productive has spurred the technology revolution in automobiles. This revolution and the advent of mobile technology like Telelink, OnStar, and Mtune have now allowed vehicles to become information hubs. One can get vehicle diagnostics, navigation in real time, info on things like weather, traffic, sports scores, music, fuel pricing and more via vehicle commands. People can even make calls and cars can automatically contact emergency services in times of danger. These are breathtaking advances. Manufacturers like Toyota and General Motors have partnered with companies like QNX, Microsoft and others to create in-car apps where touch screen technology similar to that found in mobile devices is now available in cars with screens of 8.4 inches or higher and seamlessly integrating with mobile devices.
“The pleasure that I get out of working [at Ford] is to one minute be designing an F-150 pick-up or a Lincoln pick-up then I get on a plane and the next morning I’m designing Aston Martin in London. So that’s a quite nice thing, to be able to change hats and change personalities.” -J Mays Ford VP of Global Design